2. What is your favorite color?

3. What is your favorite food?

Anything my wife cooks… and dark chocolate.

4. Do you have any hobbies?

Flyfishing,  guitar, baseball, hiking, and pinball. I also like to read!

I have a West Highland terrier named Roy. He’s a complete knucklehead. I wrote ROY DIGS DIRT about him.

I have a daughter named Emma. She’s a writer, too!

7. Where do you get your ideas?

I never know where an idea will come from, so I write them all down in a special notebook. I even write down the ideas I think are dumb – sometimes they turn out to be the best ones.

8. What’s your favorite book that you wrote?

I like them all for different reasons – Alice the Fairy is based on my daughter, Good Boy, Fergus! Is about my dog, and I like Jangles because it’s about fishing. But probably No, David! is my favorite because it reminds me of being a kid!

Sort of – David is based on me, but he’s not exactly me. I got the idea from a book I made when I was little. I drew a bunch of pictures of me doing stuff I wasn’t supposed to do. The only words in the whole book were “No” and “David” because those were the only words I knew how to spell! My mom saved it and showed it to me many years later. I thought it might be a good children’s book, so I wrote some more words and drew new pictures. That’s the No, David! You’ve seen.

10. Did you really do all the things David does?

I did some of the things David does, but not all of them. I’m not telling which ones I did.

11. Did you really run down the street without any clothes on?

Like I said, I didn’t do all the things David does. Some of them were things my brother did or my friends did. As for running outside naked, that was something my nephew did – and he lived in Alaska! Brrr… I like both – they’re very different problems and solutions. Have you ever heard the saying “A picture’s worth a thousand words”? Well, sometimes the opposite is true. Try drawing what something smells like – it’s really hard. But if I tell you something smells like a sweaty old sock in a bowl of spoiled milk, you have a pretty good idea!

13. Which do you like better – illustrating your own stories, or someone else’s?

I probably like illustrating my own stories more because I can keep changing the words while I draw the pictures. But the cool thing about illustrating someone else’s story is it takes me to places I wouldn’t go by myself.

It takes about a year. First, I have to figure out what’s going to be on each page. I start by drawing lots of very scribbling “thumbnail” sketches. They’re called that because they’re about as big as a thumbnail. Sometimes I do hundreds of them!

After I decide on the pictures, I make full-size pencil drawings. I make lots of mistakes, and I change lots of things, and I erase a lot. Sometimes I get really frustrated and I crumple up my drawing and throw it away! 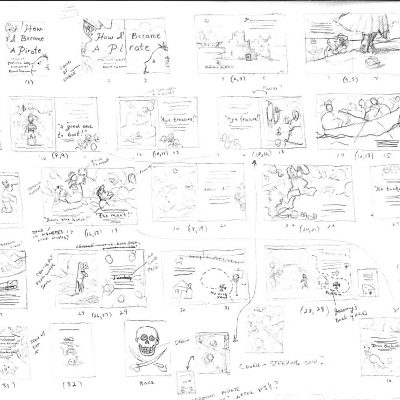 (Sketch #1) Some of the many thumbnail sketches I made for How I Became a Pirate. 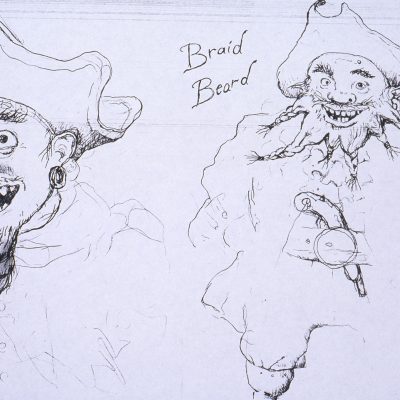 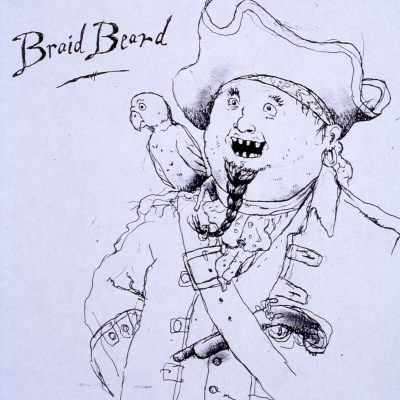 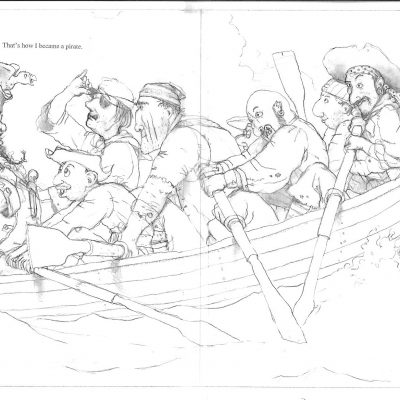 Pencil drawing of the Pirates.

When I’ve got the drawings just the way I want, I make full-color paintings of them. But I still change things as I paint. Sometimes I get a completely new idea and start over!

When all the paintings are done, I spread them out on the floor and look at them all together. It feels really good to see the whole book finished.